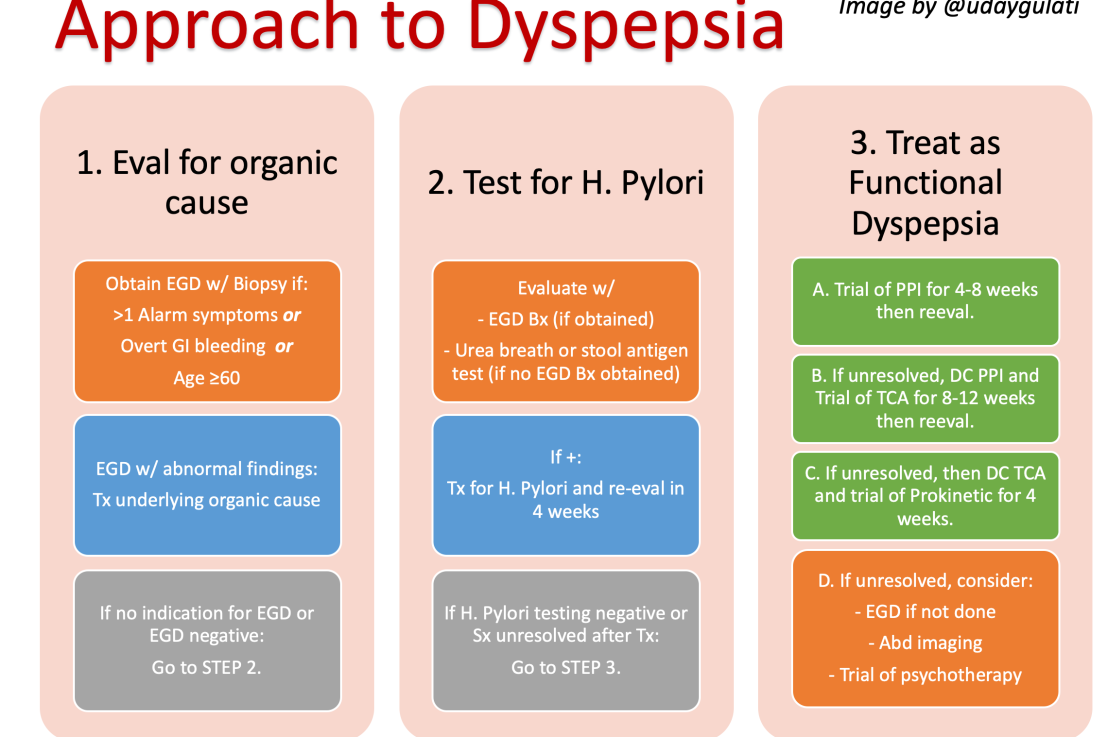 “Doctor, my tummy is bloated. I think it’s heartburn. It’s been going on for months. What’s causing it?”

Upper abdominal pain or discomfort originating in the upper GI tract that is episodic or persistent and often associated with belching, bloating, heartburn, and nausea or vomiting.

What is the difference between dyspepsia and GERD?

What are the DDx of dyspepsia?

Albeit some overlap, the organic causes can be categorized as follows:

What are alarm symptoms of dyspepsia?

Certain factors in the HPI / ROS should raise a red flag.

These alarm symptoms, along with age ≥60, warrant a further invasive workup with an EGD and biopsy to rule out one of the above organic causes, specifically the neoplastic causes. This should be performed earlier than later.

What about H. Pylori testing?

Helicobacter pylori is a common cause of PUD and treatable. Therefore, we test for it. If the EGD w/ biopsy was obtained, treat if positive. If it wasn’t obtained, still test for it with a urea breath test or stool antigen assay. Recall, the serologic test has a low PPV so do not order it.

What about functional dyspepsia?

It’s a diagnosis of exclusion but doesn’t require full organic exclusion. If there are no alarm symptoms and are <60, you can proceed with H.Pylori testing. If negative, it’s likely functional.

AND no evidence of organic, systemic, metabolic or structural disease to explain symptoms i.e. negative EGD.

Pearl: look out for other GI conditions that mimic dyspepsia, such as IBS, that can also coexist with functional dyspepsia.

How do you treat functional dyspepsia?

Its a simple ladder. If the first does not work, discontinue and try the next.