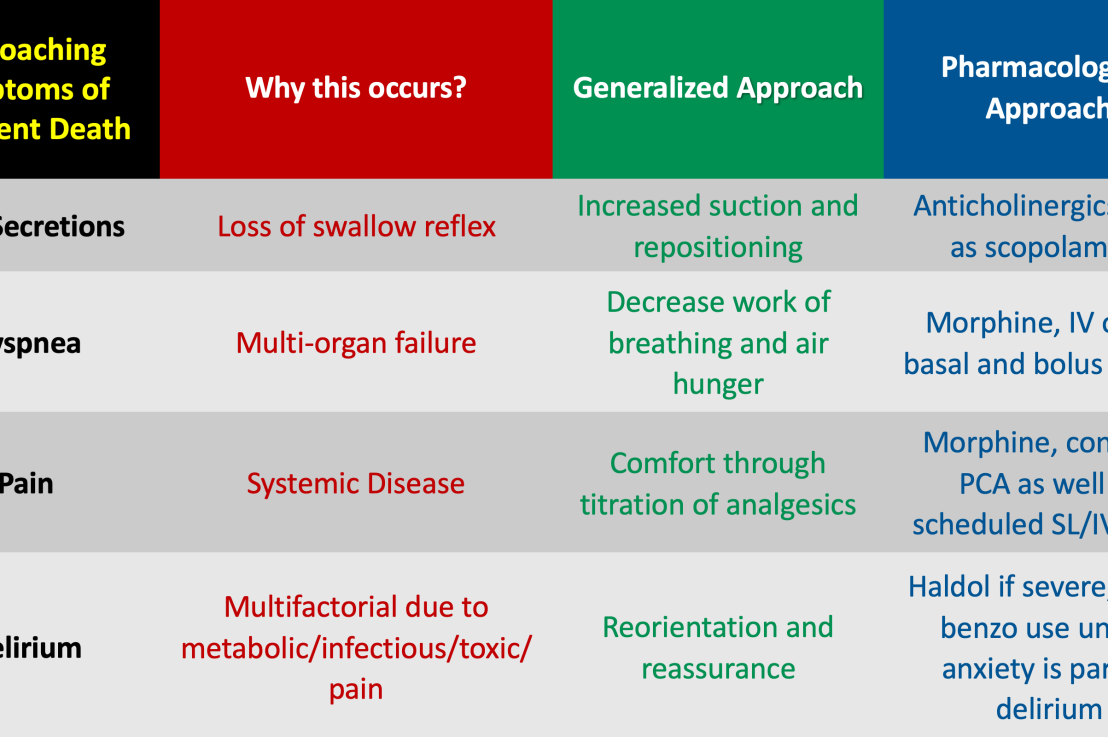 The time has come. We have exhausted our resources. We have given our very best effort. We have decided that it is in our patient’s best interests to pursue the path of comfort rather than continued intervention. We are now faced with the question that many of us are undertrained and uncomfortable to answer:

how do we help our patients with the imminent dying process?

What is the Syndrome of Imminent Death?

As described by the Palliative Care Network of Wisconsin, author of Fast Facts, the syndrome of imminent death is a collection of symptoms that occur in the final hours to days of a patient’s life. There is a stereotypical pattern among dying patients and a general trajectory that each symptom represents. Duration of symptoms can last from about one day up to two weeks, and a patient’s baseline status has a significant influence on this (ie. Someone who is nutritionally intact vs. cachectic).

What are the stages of dying?

The Palliative Care Network of Wisconsin divides the dying process into three main stages, as follows. Recognizing these stages is important in order to guide management.

What are the classic symptoms of Imminent Death?

Although presentation and timing may vary, PCNW states that the four classic symptoms of imminent death are typically the same: increased oral secretions, delirium, pain, and dyspnea.

It should be no surprise that these symptoms are not only uncomfortable for the patient, but also difficult for the family and those at the bedside to experience. Part of your management should include helping the patient’s family to understand their loved one’s symptoms and what they should expect. For example, as the patient’s oral intake begins to decrease, the family may become concerned that the patient is “starving to death”. Gently explain to the family that the body requires less and less nutrition as the dying process progresses.

How do you approach the classic symptoms?

Let’s discuss some of the common symptoms and how to manage them.

The dying process may vary by timing and severity of symptoms depending on the individual patient, but the common goal for providers should be to make this process as comfortable as possible for both the patient and his or her family.

In the interim, watch for the classic symptoms and consider managing them as below. As always, individualize and continue to evolve your approach for each patient.